Ed. note: This article by Julie Glenn was originally published in the Naples Daily News (Naples, Florida) on July 20, 2016, as a slightly longer version.

As a member of the fickle wine community, I look for something new when the whole world jumps on a grape bandwagon… [Lately] I’ve found myself seeking something different in my cabernet sauvignon. Something lighter, less fruit forward, and a bit more restrained.

My search takes me north and a bit inland to Lake County, California which, with a unique combination of altitude and red volcanic soil, is making some of the most interesting wine I’ve recently tried. Known for growing grapes and shipping them to Napa or Sonoma, Lake is now showing what its unique terroir can do. Seven regions here have earned the American Viticultural Area (AVA) designation, Red Hills AVA being the stand-out with top quality cabernet sauvignon.

It’s the kind of vineyard land Disney would create if there was ever a Princess Sauvignon of Verasionland. The soil here sparkles thanks to glittering “Lake County diamonds” which are little chunks of quartz deposited eons ago between volcanic eruptions and shifting oceans. As the sun passes over the vineyards those “diamonds” look like Tinkerbell spilled some pixie dust. The magic is in the soil which gives the wine grown here a minerality and strong tannic structure. Couple that with the elevation of 1,350-2,600 feet giving access to cooling airflow from the Pacific and you have a winemaker’s dream sequence — especially if that winemaker wants to avoid spraying for mold, mildew and bugs. Lake County has one of the lowest application rates in California for pesticides and other sprays.

The resulting wine is dreamy, too, and next week we’ll have a chance to meet with one of the best Red Hills winemakers at a wine dinner at Season’s 52 in North Naples. 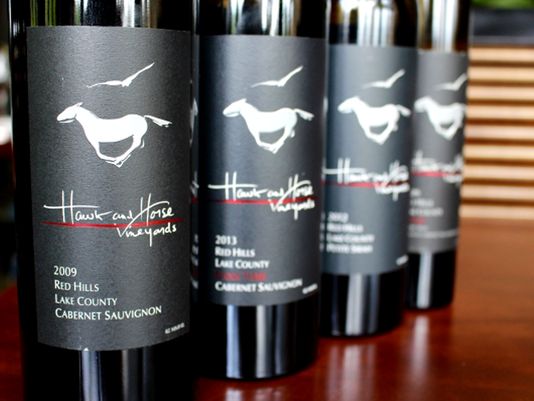 Mitch Hawkins of Hawk and Horse Vineyard will be in town to host a five-course dinner and sign a few bottles on Tuesday, July 26. The vineyard is certified 100 percent biodynamic and Hawkins uses minimal intervention in the cellar so what you’re getting is a pure representation of what’s grown on 18 acres of hand farmed Red Hills AVA land.

Hawk and Horse Vineyards doesn’t make a huge amount of wine, so access is limited and most is sold to restaurants but the local distributor, Sophie Crawford of Wines by Sophie, says retailers can special order it. Bottles will also be available to buy and take home from the Season’s 52 wine dinner. Here’s the line-up:

2012 Petit Sirah ($49-52): This grape is usually a tooth-stainer of dark red stewed fruits, but this iteration is completely different. Comparatively bright and vivid on the palate with bright berry flavors; only 40 cases were made, so this is the most limited of the evening.

2013 Block Three Cabernet Sauvignon ($48-52) 1,200 cases were made of this cabernet sauvignon with 5 percent petit verdot blended in. The primary difference between this and the “estate” bottling is the aging. This one sees 50 percent new French oak barrels and 50 percent 2-year-old barrels whereas the estate is 100 percent new oak. The difference on the palate is a little less spice in the Block Three and brighter, less mature plum flavors.

2009 Estate Cabernet Sauvignon ($88-91) This is an outstanding wine and is now a “Library Reserve” on the winery’s website so we’re lucky to have it in the state of Florida. “This wine right here is why I took on this brand,” says Sophie, the distributor. “I love the nose on it, the bright fruit on the palate, the spice, the wild rose you get from the 100 percent new French oak. I love the subtle finish.” I was lucky enough to try this wine when Sophie met with the Seasons 52 chef to plan the upcoming dinner, and I can only parrot her comments and add that it is the most elegant cabernet sauvignon I’ve tried in years.

2009 “Latigo” Cabernet Sauvignon ($45-49 375 ml) A late harvest cabernet sauvignon made Port style fortified with alembic Brandy, this desert wine begs for chocolate. It pops bright currant on the palate with a mouth-filling cloud of pipe tobacco. It will work well paired with the chocolate ganache cake and bing cherries Chef Thomas plans to present.

There will also be a guest appearance by Aril Wines whose 2015 “Kick Ranch” Sauvignon Blanc will accompany the first course. Hawk and Horse doesn’t make any white wine, so Aril (which is owned by Naples residents Harmon and Joanne Brown) will be the first wine of the night. I plan to write much more about Aril in the future, but for now let me say that their sauvignon blanc is one of my new favorites.

Julie Glenn welcomes comments and questions at juliewriteswine@gmail.com. You can see more of her writing at www.julieglenn.com, and can connect with her on Facebook and on Twitter @juliewriteswine.