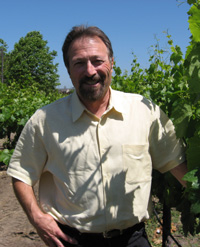 Vince grew up in Lodi, and his interest in grape growing began while working in his family’s vineyards. He went on to attend Fresno State in the early 1970’s as the California wine industry began to boom, and graduated with a degree in plant science and viticulture. While in college, Vince served as vineyard foreman of the Fresno State vineyards for two years.

In more than 30 years of farming vineyards, Vince has found the greatest challenges and rewards come from coaxing elusive reserve quality fruit from a vineyard. He enjoys starting a vineyard from scratch, but is almost equally intrigued by trouble shooting a problem region, increasing production and quality with common sense and, sometimes, innovative farming methods. Although he loves the satisfaction of growing and drinking premium Cabernet Sauvignon, he’s partial to the challenge of farming finicky Pinot Noir, mastering it’s unique requirements and “temperament”. Vince currently sits on the board of the Napa County Farm Bureau, is a member of the National Resource committee and is a member of the Napa Valley Grape Growers Association. He is a past recipient of the Soil Conservation Service “Cooperator of the Year” award for his work along Huichica Creek in Carneros.

Vince married his high school sweetheart, Pam. They live in Napa and are the proud parents of two grown boys, Vince Jr. and Nicholas. In his spare time, Vince enjoys golf, snow skiing and travel.