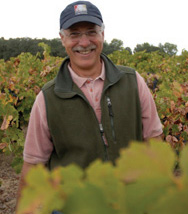 Randle Johnson, consulting winemaker, is directly involved with worldwide joint venture vineyards and brand development for The Hess Collection Winery and The Hess Collection New World Wines. As winemaker for Artezin brand wines from California and director of winemaking for Bodega Colomé in Argentina, Randle gets to experience two crushes every year, keeping him a very busy man.

Randle started as winemaker for The Hess Collection in 1983, when Donald Hess began to set aside a portion of the grapes from the Hess Vineyards for his own premium wine label. In the ensuing years, Randle has continued to hone and refine his winemaking style, working with the powerful fruit produced by the estate vineyards to create elegant wines of great complexity, depth and structure.

A native Californian, Randle attended the University of California at Davis, graduating with a M.S. in Viticulture in 1974. As a viticulturist for the original Souverain Winery in Rutherford, California, he gained first-hand knowledge of grape characteristics produced by the differing micro-climates found in the Napa Valley. Later, under the guidance of Souverain winemaker Phil Baxter, he learned the practical aspects of winemaking from the floor up, as assistant winemaker.

In 1977, an opportunity came along that he could not resist. Randle became the vineyard manager and cellarmaster for Mayacamas Vineyards, located 2,500 feet up on Mount Veeder in the western hills of Napa Valley. This experience fostered an intense interest in the unique attributes of mountain grapes. At Mayacamas, he experimented with different Mount Veeder vineyards, making several distinctive experimental wines.

After two years as winemaker at Stags’ Leap Winery, Randle returned to Mount Veeder in 1983 , joining the emerging winery of Donald Hess to produce exceptional wines from the mountain grapes of Mt. Veeder. In 1996, that vision went global with the establishment of an import company, The Hess Collection New World Wines. Randle currently concentrates his efforts on Artezin wines, Bodega Colomé, and specialized winemaking projects.