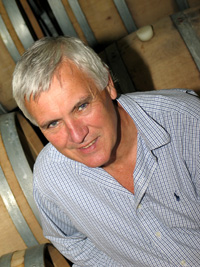 Philip Shaw Wines, Koomooloo Vineyard, Orange, Australia is the dream that has been in the working for last 40 years.

Philip Shaw, formerly head of Production/Winemaking for both Rosemount and Southcorp Wines, is one of the world’s leading winemakers. He has twice won the coveted Winemaker of the Year at the London International Wine and Spirit Competition, in 1986 and 2000. He was also the 1999 Qantas Gourmet Traveller Wine Magazine’s Australian Winemaker of the Year and was awarded the 2000 Graham Gregory Trophy for his outstanding contribution to the Australian wine industry.

Born in Adelaide, South Australia, Philip began making wine when he was 12 years old, using the bathtub and lemonade bottles! At 15 years of age, he began working in wineries in the Adelaide area, notably at Penfolds and Wynns Magill.

After graduating from Roseworthy, Philip assumed the role of head winemaker with Lindemans Karadoc in 1972 at the age of 24. He then became Rosemount Estate’s winemaker in 1982 and was instrumental in Rosemount’s extraordinary success around the world. Following the merge between Rosemount and Southcorp Wines, Philip was group winemaker for Southcorp Wines from the 2001-2003 vintages.

During his time at Rosemount, Philip established his own vineyard in Orange in 1989 after years of searching Australia for the best site to make exceptional wines with flavour and finesse. The opportunity to pioneer an area also appealed. Philip’s belief in the region has been backed by numerous international awards.

In 2003, Philip jumped off the corporate train and began working full time in the Orange district for both his own brand and as CEO of Cumulus Wines. Philip firmly believes that the strong synergies between the companies have great potential to position Orange as a leading Australian Wine Region.
Philip is renowned for relentless testing of varietal and clonal suitability. He believes the pre-eminent variety for the Orange region is Merlot. The balance of high altitude and high UV has produced years of successful examples.

The Philip Shaw Wines are sourced entirely from the Koomooloo Vineyard. The vineyard is cool climate vineyard rises to an altitude of 900m (2,950 feet). Making it one of the highest vineyards in Australia.

Philip’s philosophy is “Every wine should be placed on its own canvas and not replicate others. You should be guiding the direction of the wine not controlling it – always challenging the achievements.”

This is a family owned and operated business. We are bringing together a team of people that share the philosophy of what we are creating. This is a team of individuals with their own character, challenging each other.

The small Koomooloo team includes his son Damian in the market, Scott Cohen in the vineyard and Marc Udy in the winery.