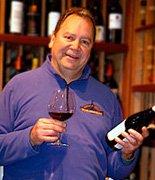 With decades of experience in the food and wine business, Jeff Prather shares his wealth of knowledge through engaging, and often amusing, wine content for the Ferry Plaza Wine Merchant Wine Bar and their website. After opening the Culinary Institute of America in Napa Valley in 1995 as the Restaurant Director and Cellar Master, Jeff served as Director of Wine Education at Shafer Vineyards, Flora Springs Winery, as well as the historic Beaulieu Vineyard. After serving as Senior Wine Merchant for the original Wine.com, Jeff was the managing Director of Azalea Springs Winery. Jeff became known for his decade of work as Wine Director for Ray’s Boathouse in Seattle which merited him several awards, including four James Beard Award nominations. Jeff judges at wine competitions and is a frequent speaker and guest sommelier at national wine events. As a writer, he has been published in several magazines, was a correspondent for the Microsoft Online Network (MSN), a contributor to Oz Clark’s Microsoft Wine Guide CD-ROM and is co-author of the book “Northwest Wines.”