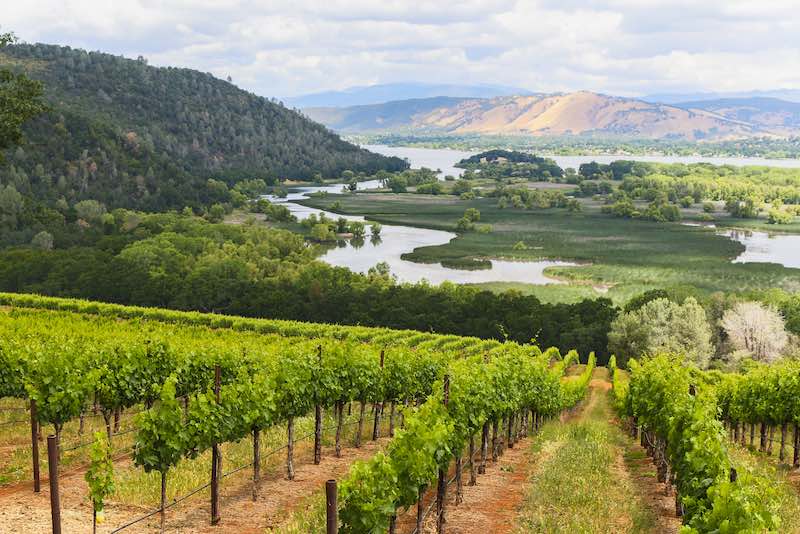 “It’s so crisp and cool and clear, I just love it,” said pensioner Diane Tibbs while her husband Brad nodded in agreement as they both tipped back their glasses to finish them off.

“Easily half of what I buy, especially after April, is Sauvignon Blanc,” said Marika Klaver, a 30-year-old corporate interior designer, who went on to explain that the balance of her wine consumption is split between Pinot Grigio and Merlot, a red that she adds to the mix as autumn rolls around.

On 5 May, these consumers, and more than 300 others, made their way to Lake County, California, to attend the 2018 International Sauvignon Blanc Experience. Even so, most drinkers of California wine may not have heard of Lake County, nor the Sauvignon Blanc conference that the region hosts in an attempt to remedy that fact.

Despite its level of obscurity, Lake County remains one of California’s most interesting and valuable wine regions. Located just over the Mayacamas and Vaca mountain ranges, 40 miles (65 km) to the north of the Napa Valley, the Lake County wine region currently hosts more than 10,000 acres of vineyards and almost 40 wineries.

If the disparity between the number of planted acres and number of wineries strikes you as unusual, then you may not be aware of a fact about which Lake County remains profoundly ambivalent. No one knows the exact amounts (or if they do, they aren’t telling) but somewhere between 10% and 15% of Lake County fruit ends up in wines that are labelled with Napa Valley appellations and another estimated 20% to 25% goes into high-end, appellation-designated wines from elsewhere around the state. Under current California law, up to 15% of the wine in any bottle can come from outside the appellation printed on the label.

On the one hand, growing high-quality grapes deemed good enough to supplement $150 bottles of Napa Cabernet would represent a feather in most wine regions’ caps. On the other hand, Lake County quite reasonably seeks to legitimise itself as a growing region in its own right – a terroir worthy of recognition and patronage.

Hence the weekend trade conference and consumer tasting of Sauvignon Blanc, a grape that Lake County hopes to make synonymous with the region.

“Sauvignon Blanc is the most important variety for our region,” said Brassfield Estates winemaker Matt Hughes. “It’s important that we have a place in the world spectrum, to prove that we deserve to be a player.”

As it turns out, there exist a few excellent reasons for Sauvignon Blanc to be a focus in Lake County.

More than any other wine region in California, Lake County’s geology has been profoundly shaped by volcanic sources. Geothermic forces and several major active volcanoes were responsible for the region’s topography, soils and the caldera in the middle of it all, now filled with water and its prominent namesake. (Clear Lake, viewed from Vigilance Vineyards, is pictured above by Nathan DeHart.)

Lake County boasts some of the youngest soils of any California wine region. The 300,000-year-old volcano at the southern end of the lake last erupted a mere 11,000 years ago, blanketing the region in volcanic ejecta. And while dormant, Mount Konocti remains rated ‘High’ on threat lists maintained by government geologists. The geothermal field underlying the region is the world’s largest and most powerful, running 22 different power stations that light up more than one million homes with steam-generated electricity.

While the county’s wine areas are not uniformly volcanic in nature (some feature uplifted seabed and alluvial soils that are partially sedimentary), the geothermal and volcanic forces shaping the entire region have left a distinct chemical imprint in the soils. While it is difficult to generalise, the ratio of calcium to magnesium in soils considered ideal for wine grapes hovers somewhere around 5 times as much calcium as magnesium. In many places in Lake County, the ratio is 1:1.

Very few grapes survive, let alone thrive, with high levels of magnesium in the soil, but the most magnesium-friendly grape varieties in common cultivation are none other than Sauvignon Blanc and its offspring Cabernet Sauvignon. Perhaps not surprisingly then, Sauvignon Blanc makes up 84% of the white wine grapes grown in Lake County, and Cabernet Sauvignon dominates the reds, with almost half of the county’s acreage dedicated to this variety.

Identifying a signature grape variety seems to be the perennial quest of every up-and coming wine region looking to compete on the global stage. Few New World regions have that decision truly forced upon them by their terroir, however.

Despite the fact that Sauvignon Blanc is also produced in nearly every other major wine region in California, Lake County has managed to build a strong association with the variety, thanks to the steady growth of high-quality plantings, as well as diligent promotional activities such as the Sauvignon Blanc Symposium. At the moment, the region produces upwards of 14% of the variety grown in California, according to the Lake County Winegrape Commission.

In fact, a number of wine producers in both Napa and Sonoma who have historically produced Sauvignon Blanc labelled with their home appellations have in recent years chosen to expand their production of the variety by purchasing Lake County fruit and labelling the resulting wine with the North Coast AVA, a broader appellation which encompasses Napa, Sonoma, Marin, Lake, Solano and Mendocino counties.

“At this point we believe that Sauvignon Blanc is more associated with Lake County than any other region in California,” said Jonathan Walters, Chair of the Lake County Winegrape Commission. “We’ve proven we can do it, and we can do it better than anyone else in the state. As much as we might like to talk about the quality of our Cabernet Sauvignon, grown on higher elevations and in volcanic soils, we’re never going to be able to compete with the county to the south of us that has a 30-year head start on the Cabernet conversation.”

“It’s the right grape in the right place here in Lake County,” agreed Shannon Ridge’s winemaker Joy Merrilees. “It took Europeans centuries to find the perfect grape for some of their regions. We’ve already found the right grape, and we need to continue to express it.”

Which is why, after a couple of early trials holding a Sauvignon Blanc event in 2002 and 2005, the Lake County Winegrape Commission says they have decided to invest in holding an annual symposium dedicated to the variety for both the trade and consumers.

Many wine grapes in America get their own dedicated events. If you love Cabernet, there are dozens of conferences, tastings, and symposia to attend. Pinot Noir events must number in the hundreds by now. Even the perpetual underdog Riesling has several events to its name. Sauvignon Blanc? Not so much.

“It’s the grape that everyone drinks but no one talks about,” one of my table mates astutely observed during the lunch that followed the symposium’s sessions on the genetic and social history of Sauvignon Blanc, Lake County soil chemistry, clonal variations, and experimental viticulture trials.

Indeed, Sauvignon Blanc’s charms need little analysis no matter where it is grown. One can debate the value of oak ageing and the effects of partial malolactic fermentation, but unless horribly abused, it remains one of the most reliable choices for wine drinkers everywhere looking for a crisp refreshing wine.

This accessibility, combined with its popularity, has made the grape something of a target for either dismissal or derision among the ranks of sommeliers and wine writers. Wine writer Mike Steinberger, during the time he wrote columns for Slate Magazine dedicated an entire month’s effort to explaining why “Sauvignon Blanc is overrated”:

“Simply put, the grape is a dud, producing chirpy little wines wholly devoid of complexity and depth, the very qualities that make wine interesting and worth savouring,” wrote Steinberger. Poor Sauvignon Blanc. It gets called a ‘porch pounder,’ ‘cocktail wine,’ or even ‘cougar juice,’ a somewhat derogatory American reference to middle-aged divorced or single women out for a good time at all costs.

Thankfully, such conversations seem confined to the wine cognoscenti.

“It’s so refreshing, and friendly, just like the people here,” said Tracy Yoshimizu, who, with her mother Jan, was visiting Lake County for the first time to attend the Sauvignon Blanc Symposium.

It’s hard to imagine those sentiments being considered in Lake County as anything less than total success.

The Rise of the Red Hills of Lake County

Rare volcanic wines are getting poured around the globe