The Story of Lake County Rising 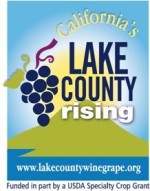 While wine grapes have been part of the Lake County landscape for well 150 years and are woven into the soul of this community, the county is only now regaining its glory as a great wine-growing region.

Located just north of Napa, Lake County includes 8,700 acres of vineyards that circle one of the oldest geological lakes in North America, situated between the Mayacamas Mountains to the west and the Vaca Range to the east. Today, vineyards line the valleys and ridges of these rugged mountains and soak in the sun under cobalt blue skies that boast the purest air in California. One hundred and forty growers cultivate vines in an astounding array of soils, from rocky volcanic highlands to alluvial plains flanking Clear Lake.

The wine region has been rising in the eyes of critics and consumers alike. Lake County’s intensity of place — climate, soils, and sunlight — produces grapes and wines of compelling quality and character:

Compelling terroir: Most of the region’s vineyards are planted at 1,500 feet and above and they benefit from higher ultraviolet light levels, which promotes intensity with balance.

Sustainable vineyard practices: Higher and drier mountains have less pest and mildew pressure, cold winters reduce pest populations, and a shorter season requires fewer pesticide and other applications. As a result, Lake County is among the lowest pesticide use areas of any wine region in California.

A New Day in Lake County

The result of excellent vineyard conditions and ongoing investment in the people who tend to those vineyards is a growing recognition of Lake County as a source for premium wines and winegrapes. Not long ago, Lake County fruit was used more often than not for blending into more expensive Napa wines. Back then, Lake County was Napa Valley’s little-known “secret ingredient.”

Today, it’s a different story. Prestigious vineyard owners like Andy Beckstoffer have purchased and planted significant vineyards in the region and now sell fruit to winemakers who proudly display the Lake Country designation.

This transformation has not gone unnoticed. Lettie Teague in the Wall Street Journal notes that the past 10 years have been “a time of resurgence and regrowth” for Lake County wines and winegrape growers. James Laube of Wine Spectator agrees, saying the county is “poised to make an impact.” And the Red Hills AVA was cited as one of 12 “Next Great Wine Regions” in Food & Wine Magazine.

The recent excitement around Lake County vineyards and wines is only the latest chapter for a region with a much longer story.

The first vineyards were planted in the 1870’s and internationally recognized wines were being produced by 1900. Like many regions, Prohibition stopped winegrape production and it did not reemerge in this agriculturally oriented county until the 1960’s. Many of the area’s growers are generational farmers whose families grew such crops as pears and walnuts before planting vineyards.

“We have gone from historical to traditional to professional,” notes Peter Molnar, Chair of the Lake County Winegrape Commission as well as the vineyard manager for his family’s Obsidian Ridge Vineyard found in Lake County’s Red Hills AVA.

“We have always had to work hard as a region and that hard work is now paying off,” says LCWC President Debra Sommerfield.

Sommerfield notes that while many areas are struggling with what to do in a tough economy given their higher price point bottles and winegrapes, Lake County represents a tremendous opportunity. “Our winegrapes lend themselves perfectly to programs that range from $10 to $40 per bottle while providing fantastic quality that will stand-up to anything out there,” she says.

The region boasts excellent terroir. For example, the Mayacamas Range, sometimes referred to as the “Axis of Cab” runs through Lake County and down into Napa’s famed Cabernet Sauvignon producing area. However, the cost of land is considerably cheaper than other parts of the North Coast appellation, creating a compelling combination. Many experienced growers, such as Andy Beckstoffer and Reynaldo Robledo, who cut their teeth in other parts of the state, have seen this confluence of factors and established operations in Lake County. As a result there are now more than 160 growers and over 30 wineries in the region.

While the region is best known for Cabernet Sauvignon and Sauvignon Blanc, numerous varietals do well in the area, including Petite Sirah, Merlot, Syrah, Cabernet Franc, Zinfandel, Tempranillo, Chardonnay, and Riesling. Wines made from these varietals have been winning awards and receiving critical acclaim in recent years.

A Tradition of Stewardship

Sustainability and stewardship are also central to Lake County’s approach. Seventy percent of the county’s growers have taken part in the “Code of Sustainable Winegrape Practices Self-Assessment Workbook,” a program of the California Association of Winegrape Growers. “Currently, 5% of our vineyards are organically farmed, but we are on track to raise that level to 15% by 2013, that will make it one of the highest in the state,” Molnar says.

Ultimately, as Sommerfield notes, it comes down to the people. “We have a dedicated cadre of professional growers. We work hard, we’re small, we’re nimble and we are coming together as a region,” she says.