St. Helena Star: Tasting a Diverse Group of Grape Varieties from Our Neighbors to the North 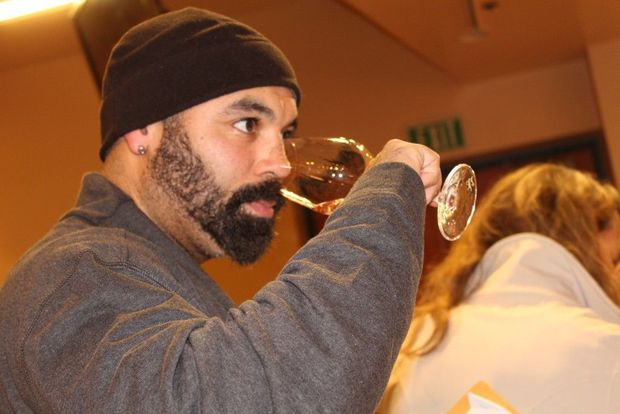 Napa Valley winery owner John Skupny is not happy. He has been told that a local source for his Lang & Reed Chenin Blanc is being planted over to cabernet sauvignon. It isn’t even an ideal location for the incoming grape, he laments, but economics rule the day: Napa Valley’s dominant grape variety will fetch a much higher price than the white chenin blanc grape.

As he tells his story, dozens of wines from Napa Valley’s northern neighbor, Lake County, are on display on counters at the front of the room, showing a diverse group of grape varieties. Marsanne, muscat canelli, charbono, aglianico, malbec and more are there. With him at the special tasting event are 40 winemakers, winery owners and other industry members from both Napa Valley and Lake County. To the latter, he encourages: “Be daring — keep the tempranillo and marsanne — and play with other varieties.”

Held at The Culinary Institute of America’s spacious Ecolab Theatre, the tasting was organized and hosted by David Stoneberg, editor of the St. Helena Star (who lives in Hidden Valley Lake in Lake County); Terry Dereniuk, executive director of the Lake County Winery Association; and Debra Sommerfield, president of the Lake County Winegrape Commission. The common goal was to taste and assess the current wines being produced in the region.

Lake County has long sold much of its grapes for blending into Napa Valley and Sonoma Valley wines. Famed grapegrowers like Napa Valley’s Andy Beckstoffer are invested in the region. The area has its charms for visitors: Vineyards and wineries span out from California’s largest natural lake, Clear Lake, and the region is said to have the cleanest air in the state. Most vines in Lake County are planted at over 1,500 feet elevation. Mount Konocti, the dormant volcano, and the Mayacamas mountains provide for spectacular views along the serene skyline.

Daytime warmth for ripening, along with elevation and very cool nights for retaining acidity, are just two of the reasons that Lake County is known for wines with juicy fruits and balanced acids along with desirable tannins.

Following the walk-around tasting of wines from several dozen Lake County producers, participants discussed their impressions. Tim Carl, writer and co-owner at Knights Bridge Winery, appreciated the diversity of the wines, likening the tasting to a “tour through Italy, France and a host of other regions” given the wide range of varieties presented. Carl particularly admired the Rosa d’Oro Vineyards Aglianico ($24), which he said had “beautiful richness without being overly tannic.”

Bill Dyer, of Napa Valley’s Dyer Vineyards and Meteor Vineyard, also believed the Aglianico shined. It is not easy, he shared, to tame the tannins of this grape as winemakers Nick and Pietro Buttitta managed to do successfully with the Rosa d’Oro wine.

Susan Feiler, owner of Lake County Wine Studio, confessed she was “smitten” by the Moore Family Winery Charbono ($30) – her first Charbono – which she found very approachable and drinkable. The grape has long roots in Northern California and Moore’s wine displayed the classic juicy fruits, refreshing acidity and moderate tannins of the Charbono grape.

Lake County winemaker Matt Hughes joked that one of his favorites of the tasting was the Six Sigma Ranch Tempranillo (which he makes) but was quick to admire wines such as the Bodkin Wines Muscat Canelli ($19), noting its mix of refreshing acidity and richness.

“The initial entry was sweet but the wine finished dry; a sweet perception,” said Hughes. His other favorites included the Alienor Grand Vin ($65), a cabernet franc and merlot blend made by Denis Malbec, which he called “really elegant”; the other cabernet francs in the tasting, Steele Wines Cabernet Franc ($18) and R Vineyards Cabernet Franc ($25); the Roso d’Oro Aglianico, which was “balanced, very pleasing – even hedonistic”; and two zinfandels, Smiling Dogs Ranch Zinfandel ($25) and Jelly Jar Wines ($24), which he believed showed the character of their volcanic terroir.

Joy Merrilees, director of winemaking at the Shannon Ridge Family of Wines, continued the jesting, suggesting that a payment of $5 by Matt put his Six Sigma Ridge ‘Christian’s Reserve’ Tempranillo ($48) on the top of her favorites list.

Her and Hughes’ jesting was just one of the examples of the warm and comfortable respect and collaboration that the Lake County industry folks showed that day.

As individuals arrived at the CIA’s Ecolab at the outset of the tasting, there was a constant wave of warm hellos and hugs, hearty laughs, and a real sense of community – a tight-knit group genuinely happy to be in one another’s company.

Continuing with the comments, Eric Stine, director of winemaking for Foley Family Wines, admitted that he had previously tasted many of the wines in the room, and admired the newly released Vigilance Sauvignon blanc from Shannon Ridge ($19.99). He found the wine to be a fine example of Lake County’s fresh and zesty sauvignon blanc. Joining his favorites list was a Rhone-style blend made from Grenache-Syrah-Mourvedre by Fore Family Vineyards ($32), which was 65 percent syrah, 20 percent Mourvedre and 15 percent Grenache.

Hugh Davies, owner of Napa Valley’s Schramsberg and J Davies Wines, commented that after tasting the Langtry Estate Marsanne ($30), he wished there were more white wines in the tasting. He admired the fruit, and called the wine “viscous on the palate. He also enjoyed the cabernet francs (Steele and R Vineyards), as well as the Gregory Graham Wines Cabernet Sauvignon ($30), which he found to be “more Napa-like.” It was the Fults Family Vineyards Wildfire blend of seven varieties ($30) that he found most exciting. Is J. Davies ready to produce a seven-variety blend? Not likely, said Davies, but he did quip: “I would drink that Fults wine – and plenty of it.”

Kyrsta Scully, former food and beverage director for Indian Springs, brought price points into the discussion. Participants were quick to agree with her appreciation of the reasonable prices ($19 to $65) of the Lake County wines. Red wines found at the top end of the range such as the Alienor, Thorn Hill Vineyards Red Rock Reserve Cabernet Sauvignon ($60), and the Obsidian Ridge ‘Half Mile’ Proprietary Red ($60) provided the body, flavor and balance to compete with some of the best wines of the world.

Adding to the discussion on price, John Skupny said, “All of the Lake County wines represent a really great value, and are all great drinking wines that are varietally in-tune.” Giving yet another nod to the range of varieties planted in Lake County wine country, Skupny added, “They grow great grapes up here; there are some wines that the Somm (sommelier) crowd would really like up here.”

With the wide range of varieties being admired, Kristin Belair, winemaker at Napa Valley’s Honig Winery, summed up the tasting best as she admired the “sense of pioneering” in Lake County; the fact that producers are “doing nontraditional blends and varieties, and coming up with great wines. (It is) exciting – stepping out of the box.”

“Fearless in Lake County” best describes the atmosphere of grapegrowing in this Northern California region. Lake County is an exciting place for wine discoveries, and given its personable and pioneering spirit, potentially our next box office hit on wine.

Catherine Bugue, the Star’s tasting panel columnist, loves writing about — and drinking — wine. You can contact Catherine at catbugue@gmail.com.

Ed. note: This story was originally published in the St. Helena Star, January 27, 2016.