With major wildfires occurring every year in California, winegrape growers and buyers are obviously concerned about the effect of smoke on vineyards. Do wildfires necessarily mean problems for vineyards? 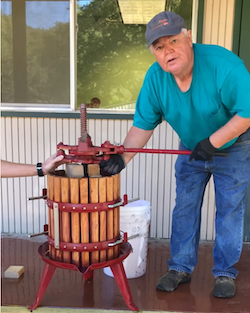 “It can be difficult to determine if fruit has been compromised in quality when exposed to wildfire smoke, and whether or not smoke flavors will result when wine is fermented,” McGourty says. Among the factors that play a role are the vineyard’s proximity to an active fire, wind direction and speed, and air temperature.

To study this issue, McGourty formed a workgroup of local growers and winemakers with Anita Olberholster, UC Cooperative Extension enology specialist in the Department of Viticulture & Enology at UC Davis. The team analyzed 14 lots of wine from Lake County vineyards and one control lot from Napa. They focused on the presence of volatile phenols and glycoside compounds in the finished wine.

McGourty says that sampling winegrapes close to harvest, performing micro-fermentations, and running a guaiacol lab analysis is a good way of determining whether smoke from wildfires is likely to damage the final product.

To learn more, view the video below.