The North Coast wine sector is grappling with the lingering effects of 2017 wildfires, especially after a harvest last year marred by smoke taint in grapes among the vineyards in Lake and Mendocino counties.

The threat of wildfires is not going away. Growers can try to mitigate risk through crop insurance, but that still is no consolation against the amount they could have made selling the grapes. Making matters worse, the large wine companies that buy most of the grapes have tremendous leverage over what they put in the contract for the fruit they reject.

One Santa Rosa company, however, thinks it may have found a solution for treating grapes tainted by smoke — the wine industry equivalent of turning lemons into lemonade. 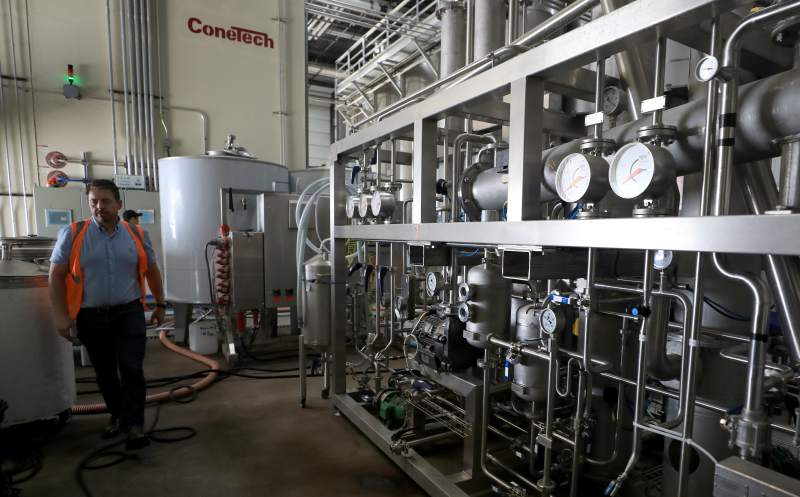 A ConeTech filtering system has allowed the company to remove smoke taint from winegrapes affected by the last few years of wildfires. (Kent Porter / The Press Democrat)

In fact, ConeTech has gotten attention among winemakers since the company is on track to treat 1 million gallons of wine made from tainted local grapes by year end.

ConeTech is using its proprietary technology to treat wine made from such grapes to remove the odors and taste — which has been described as ashtray-like and tar. The company claims those smells have not reemerged with the wine that has so far been processed. It’s still working on a protocol for third-party testing.

“We are getting a lot of word of mouth because people are talking. We are giving them hope that there could be a long-term aid and solution to their problems,” said Larry Wu, vice president of innovation and research and development of Advanced Beverage Technologies, ConeTech’s parent company.

Lake County grower Clay Shannon said he took wine made from grapes in his vineyard to ConeTech and has experienced no problems with the refurbished wine. Shannon had some large wineries reject his fruit because of smoke damage though he argued third-party analysis did not show large concentrations of smoke exposure. “This new science is removing the smoke issues,” he said earlier this year.

Shannon, however, has been one of only a few growers to go public as most do not want to openly admit they have a problem. “No one wants to say they have smoke taint in wine. There is a stigma,” Wu said.

ConeTech also treats wine to lower the alcohol content, as well as remove acetic acid that can give wine a vinegary flavor. It uses similar technology to distill the wine and remove the essence — liquid molecules of aromatic flavors and aromas — through its machines.

Workers then treat the vast remaining smoke-tainted wine by removing the volatile compounds. The essence is later reinserted into the wine. During the process, the winemaker has the final signoff on the treatment.

“Flavor management is an integral part. We are able to separate those flavors. We essentially can treat the wine comfortably without affecting the flavors,” said Gaspar Roby, vice president of operations for Advanced Beverage.

The wine is either bottled, blended with other wines or sold on the bulk market in attempt for grape growers to recover as much money as possible from the smoke damage.

“We want to give them the power to utilize what they still harvested last year without totally putting it down the drain,” said Jessica Smith, director of domestic operations at ConeTech.

Other companies offer different options such as the use of enzymes and a filtration process called reverse osmosis. Also, there is a process known as “flash détente,” which involves briefly boiling grape skins and juice before fermentation up to 185 degrees and using a vacuum chamber to extract volatile compounds that contribute to smoke taint.

ConeTech focuses on a broader range of about 10 compounds in the wine, beyond the two that are generally believed to cause smoke taint during fermentation: guaiacol and another related compound, 4-methyl guaiacol.

In its research, ConeTech has found one compound — syringol — “is one of the main culprits” causing smoke taint, Wu said.

But those findings have led to a broader issue in the debate: There is no industry or federal standard for what chemicals are responsible for smoke taint.

In absence of such a standard, each winery and crop insurance company is left to spell out the definition in their own contracts and policies.

“What we are concluding is that those (two) markers are not necessarily accurate,” said Debbie Novograd, deputy CEO and chief marketing officer for ConeTech’s parent company. “We want to start a new conversation that says what should actually be tested in order to determine smoke taint or not.”

The company’s work with brown spirits — specifically over what generates a smoky aroma in bourbon and whiskey — actually has helped it identify key markers for smoke and led to greater insight in wine.

“The same chemicals that give smoke taint in wine give maturity in bourbons,” Wu said.

Agriculture Financing: Understanding the Basics of Your Financial Statements