Rare volcanic wines are getting poured around the globe

Growing grapes on the scorched slopes of a volcano that’s still spewing fire, smoke, and lava is as extreme as viticulture gets.

The reward for the risk — in some cases, grapes are grown on volcanoes that could erupt at any time — is the world’s most exciting wines.

2018 is turning out to be the year for wine’s lava lovers. The inaugural International Volcanic Wine Conference descended on New York at the end of March, following volcanic wine events at two recent European trade fairs, Vinisud in France and ProWein in Germany.

Why are these wines getting so much buzz?

The push is not just some marketing gimmick. Volcanic soils account for only 1% of the world’s surface but contribute a much larger%age of the world’s great vineyards, such as those on Santorini. The Greek island’s salty, tangy whites burst upon the New York wine scene a couple of summers ago to wild acclaim.

Ash-enriched soil is also responsible for smoky, earthy reds and whites born in the shadow of Sicily’s Mount Etna; they have captivated adventurous wine lovers looking to shock their palates with something different.

Master sommelier Dustin Wilson, co-founder of New York-based Verve Wine, recently told me that his current fascination is Spain’s Canary Islands, whose volcanic landscapes look positively apocalyptic. Sales of these wines outside their native land grew more than 40% in 2017, according to the island’s association of winegrowers and winemakers.

The volcanic wine movement is still in its infancy, but Toronto master sommelier John Szabo, the author of Volcanic Wines: Salt, Grit and Power (Jacqui Small, $19.88), a gorgeously photographed book published last year, is busy trying to add momentum. He masterminded the New York conference, for which he rounded up 40-odd wineries from regions in countries from Italy to Hungary to California to Chile.

“All of my favorite wines come from dormant or active volcanoes,” Szabo admits in a phone interview.

Szabo attributes their current hotness to a confluence of factors.

First, most volcanic spots are known for preserving unique, indigenous grape varieties that offer different flavors than do such ubiquitous international varietals as chardonnay and cabernet. Little can grow in layers of volcanic ash and pumice, including the phylloxera pest that destroyed most of Europe’s vineyards in the 19th century. In places like the Canary Islands, that volcanic soil saved local grapes such as listan negro, which has a delicious wildness to its taste.

Wines from the several types of volcanic soils — lava, pumice, ash, basalt, and more — can vary widely, but most share complex aromas, mouthwatering high acidity, and salty, savoury, earthy flavours. The porosity of these soils stores more water, which contributes to the wines’ characteristic freshness and exuberance.

But the image of volcanoes may be the secret reason these wines are getting buzz. As Eric Guido, director of wine and marketing at Morrell and Co, emailed me: “Just think of the romance that surrounds wines grown in soils born of molten earth and ash!”

Santorini, Greece: This picture-perfect tourist haven in the Aegean sea produces some of the best examples of volcanic wines. Vines are planted in fields of pumice, ash, and volcanic rock. Bottle to try: 2016 Hatzidakis Assyrtiko ($24) is intense, citrusy, and briny, with deep minerality; this is one of Santorini’s top whites, and it’s made from organically grown grapes.

Mount Etna, Sicily: Along with Santorini, this region in Sicily, with the highest active volcano in Europe, ignited the interest in volcanic wines. Its soils range from basalt pebbles and pumice to black ash. Bottle to try: 2014 Biondi Etna Rosso Outis ($34) is a bright and elegant blend of nerello mascalese and nerello cappuccio from the southeast slopes of the volcano; it’s almost Burgundian in character.

Somlo, Hungary: Though the country’s volcanoes are no longer active, violent eruptions millennia ago left behind spectacular basalt deposits in several parts of the country. Somlo, a single volcanic butte known as the “forgotten hat of God,” produces powerful, distinctive whites. Bottle to try: 2015 Somloi Apatsagi Pince Juhfark Somlo ($29) is rich, smoky, and savory and made from an almost extinct grape variety, juhfark, which is exclusive to Somlo.

The Azores, Portugal: This archipelago of volcanic islands lies in the Atlantic Ocean about 1,000 miles west of Lisbon. Most vineyards are on Pico, an island on which vines grow in small corrals made of black basalt stones. Bottle to try: 2015 Azores Wine Company Arinto dos Açores ($58) is made from arinto grapes. A fresh, salty, crisp white that brims with intense acidity, purity, depth, and power, it’s ideal with grilled fish.

The Canary Islands, Spain: This archipelago lies 60 miles off Morocco but belongs to Spain. Tenerife’s 12 198-foot Mount Teide is the highest volcano. Some vines are planted in lava cracks, others in mini-craters in black basalt. Bottle to try: 2016 Envinate Benje Tinto ($28) is a cult red from old listan prieto vines grown at 3,000 feet on Tenerife. Now on New York’s hippest lists, it shows fresh notes of vivid red fruit, spicy pepper, floral-edged aromas, and a deep, deep, earthy quality.

Campania, Italy: This southern Italian region is home to one of the most dangerous volcanoes in the world: Mount Vesuvius, which last erupted in 1944. Its ash and pumice form the soils in Irpinia, 30 miles away. Bottle to try: 2009 Mastroberardino Naturalis Historia Taurasi ($90) comes from a top wine estate making several fine reds from aglianico grapes; this dark, intense, mineral-inflected example from 40-year old vines is concentrated and deep.

Lake County, California: Mount Konocti, which last erupted 11 000 years ago, littered soils with obsidian and basalt in this area north of Mendocino. Bottle to try: 2014 Obsidian Ridge Estate Cabernet Sauvignon ($30) is a dark and brooding red, with plenty of tannin and a striking minerality, epitomizing the firm character of wines from the Red Hills appellation. 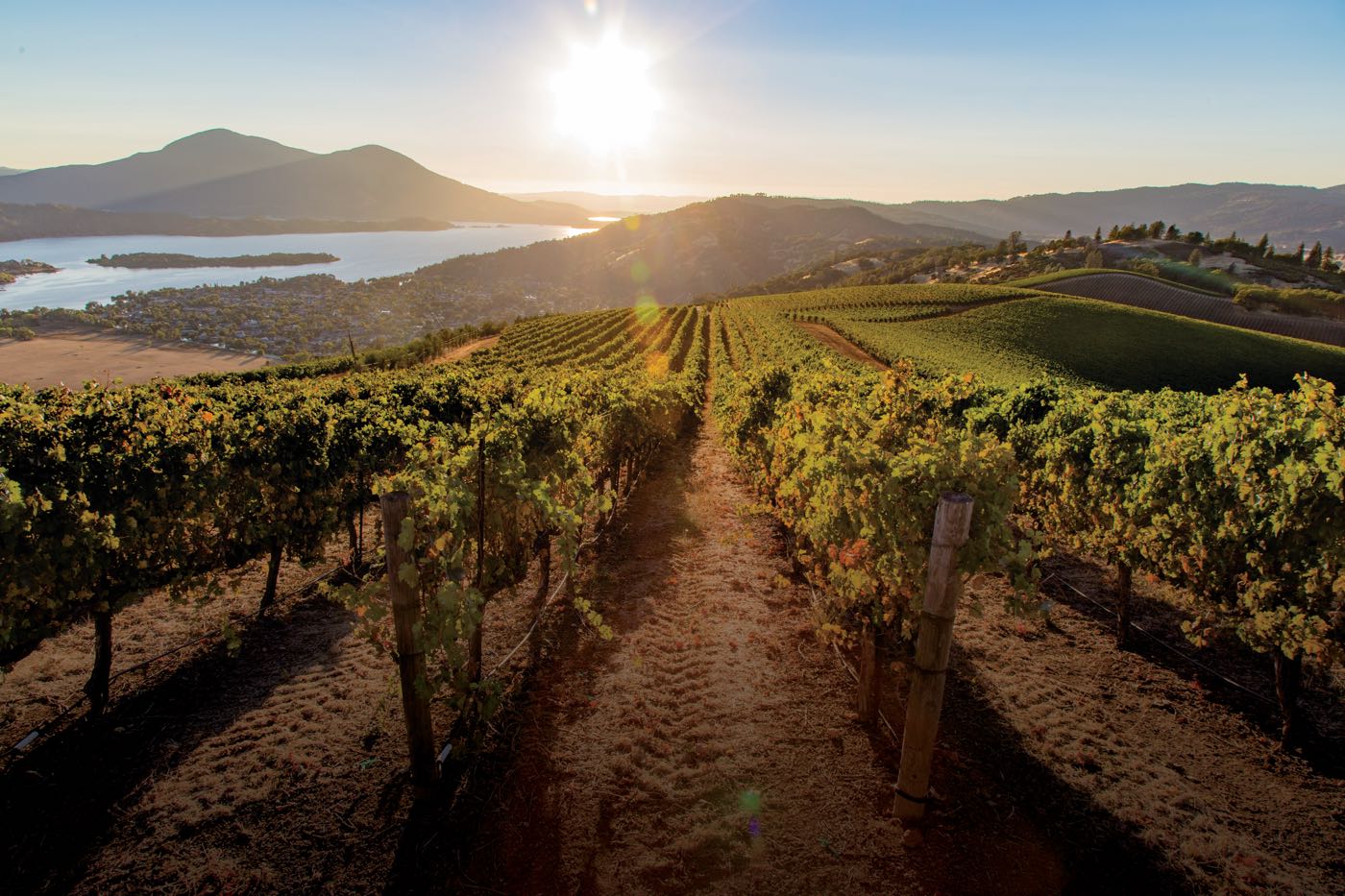