If you’re considering crop insurance for the upcoming 2019 crop year, remember that crop insurance policies must be signed no later than January 31, 2019. Contact your insurance provider for details.

More than 90 Lake and Mendocino County winegrape growers attended an informational seminar on January 8, 2019, at The Lodge at Blue Lakes in Upper Lake, California to learn more about the workings of crop insurance and how the federal program can be used to reduce farming risk.

A big thank you to the following speakers:

Note: Representatives from USDA Risk Management Agency and USDA Farm Service Agency were unable to attend due to the government shutdown.

There are still a few spots remaining in the 2019 Master Vigneron Academy®. The professional development program is designed for Spanish-speaking vineyard supervisors and foremen and kicks off in January at the Unified Wine & Grape Symposium.

Grape growing in High Valley dates to the 1870s and some “centennial vines” zinfandel still exist on the southeast ridge above the valley floor. Today, the High Valley AVA is known as one of the most exciting winemaking areas in California. With vineyards ranging in elevation from 1,600 to 3,000 feet above sea level, these are some of the state’s highest elevation vineyards. That fact, along with the valley’s east-west orientation, make High Valley not only unique in Lake County but rare in the California Coastal Range. Read more 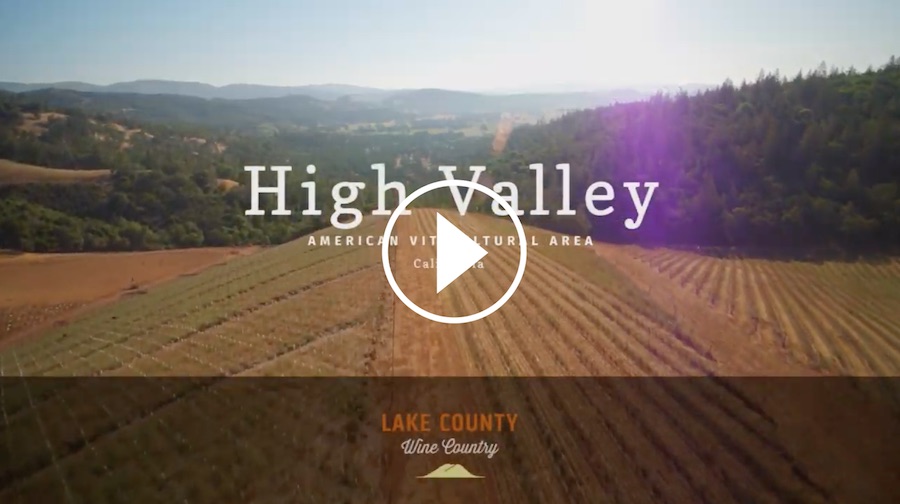 The Unified Wine & Grape Symposium provides an excellent forum for active networking between registrants and suppliers. Winemakers and grapegrowers can renew and make new friendships, as well as discuss and debate information and ideas that directly influence their work and success. 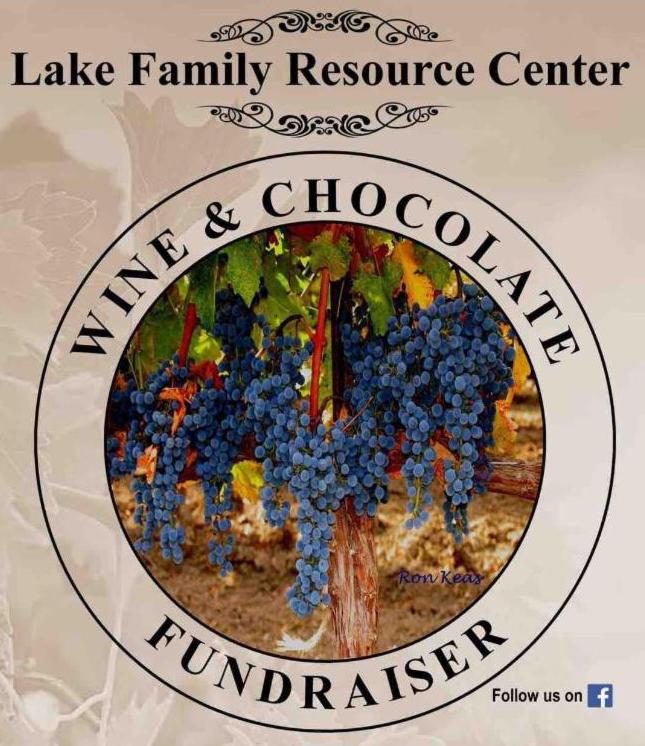 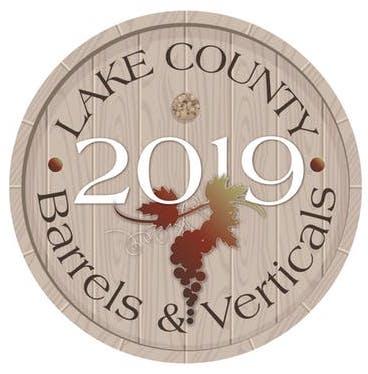 The Lake County Winery Association offers an opportunity to taste beyond the bottle on Saturday, February 23, at the third annual Barrels & Verticals, which features wines from the barrel and vertical tastings of several varietals.

For several years, the State Water Resources Control Board has been developing regulations that define wetlands and create procedures for permitting dredged or fill discharge. On January 3, the Water Board announced its final version of the regulations. The regulations are to be taken up for approval by the Board on February 5 in Sacramento.

The move for quick adoption appears to be in response to federal efforts four weeks earlier to redefine Waters of the U.S. The regulations are so narrowly written that land that is routinely farmed may be considered a wetland, and normal, daily, and seasonal farming activities may be subject to a permit by the regional water board.

The Water Board’s staff report claims the proposal exempts, “farming, ranching, and silviculture.” However, the regulation itself never uses those three words. Instead, where there may be an ag exemption, the exemption also has a huge loophole. The exemption provides that it does not apply to waters of the state which is broadly defined. There are dozens of other serious problems including that the regulations provide that Prior Converted Cropland is recognized only if certified by a federal agency.

Consequently, it is not clear what the Board intends. Nonetheless, after several years, they have stated this is the final version of the regulation.

CAWG is working with several ag groups in informing the Board on how this proposal would apply to agriculture. The Board will not accept written comments, so it is very important that the Board hear directly from growers. If you would like to testify at the Board hearing on February 5, please e-mail Michael Miiller at Michael@CAWG.org and he will help coordinate things for you.

The Agricultural Economy: A Look Forward for California and the U.S.

U.S. farm income contracted somewhat in 2018 according to the most recent United States Department of Agriculture (USDA) update, released Friday, November 30th. The report indicated that net cash income in 2018 declined 10 percent from the previous year to about $93.4 billion, the lowest net cash income since 2009. Strikingly, net cash income has declined 38 percent from the recent peak in 2012 when many in the agricultural industry experienced a protracted period of exceptional profit margins. Only one other time period, the mid-1970s, has sustained a similar decline.

The decline in farm income from the previous year was a result of both a decline in gross cash receipts and an increase in production expenses. For example, gross cash receipts for agriculture fell less than one percent from the previous year. Direct farm expenses, such as labor, feed, fertilizer, chemical, etc. increased more than two percent. Other farm expenses also increased slightly adding to the squeeze on profit margins.

However, due to strong balance sheets built during the run-up in farm income, the aggregate U.S. farm sector remains in adequate financial shape though tighter than previous years, by several measures. First, solvency measures such as debt-to-asset and debt-to-equity ratios, while seeing a modest recent rise, remain well below levels observed in the last farm crisis. For instance, though above the historic lows of the early 2010s, debt-to-equity remains below levels observed from 1962 through 2003, a 41-year period. Second, liquidity measures have tightened, but also remain above the water line. The USDA essentially reports that the aggregate current ratio remains in positive territory though down significantly from the peak years. The decline in liquidity likely also explains the slight uptick in debt levels; the USDA has estimated an aggregate debt load increase of less than two percent from a year ago.

Finally, delinquency rates for non-real estate farm loans also remain historically low. According to the Federal Reserve Bank of Kansas City, the delinquency rate for agricultural loans held at commercial banks currently sits around two percent, up slightly from the valley observed in 2012 though still below recent averages.

In California, the largest contributor to the nation’s cash farm receipts, the outlook is somewhat mixed and depends heavily on region and industry. Areas impacted by fires are understandably expected to experience a step back in farm income. Drought has also been a factor in several key production areas, with 2018 showing no signs of improvement. In fact, NOAA estimated that from January 2018 to December 2018, California’s acres showing signs of drought increased 48 percent.

In areas unaffected by fire and drought, gross cash receipts expectations vary by specific industry, but in general look to be stable or slightly down from the previous year. As an example, the USDA estimates gross cash receipts for the dairy industry to be down nine percent from the previous year, but estimates poultry receipts to be seven percent higher. After several years of strong production, gross receipts for tree fruit and nuts are expected to be slightly lower than the previous year. Likewise, vegetable gross receipts are expected to be down slightly, though consumption remains stable.

Similar to the broader farm economy, production expenses for California also increased, with the cost of labor particular concern. In Napa and Sonoma counties, key wine grape production areas, the unemployment rate in 2018 has hovered near 2.5 percent, which are historic lows. In other large agriculture-centric counties such as Fresno, Madera, Merced and Stanislaus counties, the labor market also tightened. For example, in October the Bureau of Labor Statistics estimated the unemployment rate in Fresno County was 6.3 percent, down from 2016 and 2017 levels of 9.0 and 7.2 percent, respectively.

Overall, California agricultural producers faced multiple challenges from fires, drought, trade issues, labor concerns, water rights issues, heightened supply, and more in 2018. Piecing these parts together, final 2018 profit margins will likely be tighter than the previous year. However, California farmers and ranchers have proved to be resilient over the years, in part due to the state’s very diverse commodity base. This diversity is expected to continue helping California overcome many of the recent challenges and keep it at the top of the agricultural receipt list for all U.S. states.

Protect Your Investment with American AgCredit 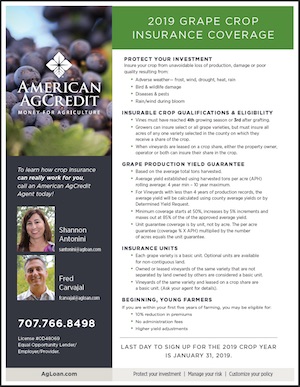 Learn more about how you can protect your investment with American AgCredit grape crop insurance coverage.

Founded in 1916, American AgCredit is a cooperative association that provides credit and financial services to rural communities and agriculture throughout California, Colorado, Kansas, New Mexico, Nevada and Oklahoma, as well as to capital markets customers in all 50 states. Our unmatched expertise allows us to provide farmers, ranchers and agribusinesses with the resources and financial solutions they need to be successful.

The 2018 International Sauvignon Blanc Symposium presented by the Lake County Winegrape Commission was featured in a seven-page article in the January 2019 issue of Wine Business Monthly. 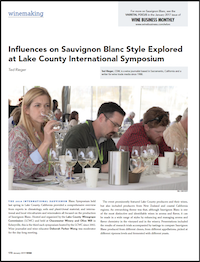 “The 2018 International Sauvignon Blanc Symposium held last spring in Lake County, California provided a comprehensive overview from experts in climatology, soils and plant/clonal material, and international and local viticulturists and winemakers all focused on the production of Sauvignon Blanc. An overarching theme was that, although Sauvignon Blanc is one of the most distinctive and identifiable wines in aroma and flavor, it can be made in a wide range of styles by enhancing and managing aroma and flavor chemistry in the vineyard and in the winery.”

Congratulations to these Lake County wines, which won Gold, Double Gold, or Best in Class medals at the 2019 San Francisco Chronicle Wine Competition.

“December continued the relatively mild conditions seen in November across the western US. The seasonal forecast for January through March continues to reflect the influences of a weak to moderate El Niño in the Tropical Pacific and a warm North Pacific…”