Editor’s note: This story was originally published by the Wine Institute in the June issue of Down to Earth, a monthly newsletter celebrating the commitment of California vintners and growers to sustainable winegrowing and winemaking; it includes an interview with Randy Krag and Paul Zellman.

Since its inception in 2012, Lake County’s Master Vigneron Academy® has helped boost the capabilities, confidence and pride of local vineyard-crew supervisors. Forty-eight graduates have now participated in the free year-long program. Chosen by their employers, these students—many of them with decades of experience in vineyard work—have the opportunity to see the wine industry from new angles. In nine day-long workshops conducted in Spanish, they explore everything from wine blending to vineyard finance. Randy Krag, a vineyard manager for Beckstoffer Vineyards in Lake County, initially proposed the novel idea, and Paul Zellman, the bilingual education programs director for the Lake County Winegrape Commission (LCWC), developed the curriculum and leads the sessions. 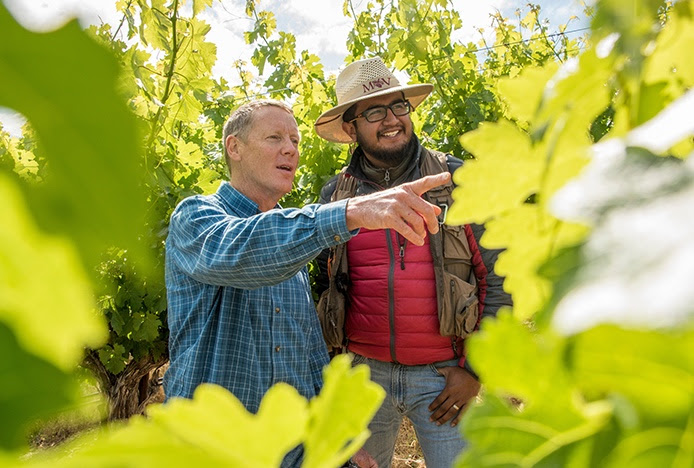 Give us some history on this project. What made you think it was needed?

RK: I received a graduate degree in integrated pest management from UC Davis, and that program really relied on field learning. We drove all over California and saw the tremendous diversity of the state’s agriculture. It was an educational method that spoke to me, and I remember it as effective.

The vineyard employees I’ve worked with in Lake County are loyal and dedicated but isolated. A lot of them don’t have a sense of the size of the state’s wine industry and all of its moving parts. I thought it would be a good idea if we could convey the big picture.

PZ: I’ve heard Andy Beckstoffer say, “Yes, we have nice vineyards but it’s the people who provide the great fruit.” And these are people we need to attract and keep because there’s so much hand labor going into North Coast grapes.

PZ: Only about 20 percent is classroom. We’re primarily out visiting vineyards and UC Davis, talking to growers and nursery managers, or observing the bottling line at Kendall-Jackson. At the University of California’s Foundation Plant Services, we watch people do grafting and tissue cultures. Then we visit a commercial nursery that buys those virus-free plants. One month we visit 14 different Sauvignon Blanc vineyards that are trained and trellised in 12 different ways. We’re showing students that there’s no one right way to grow grapes. We have also added a business component—like how a line of credit works. It’s a rigorous curriculum that doesn’t force students to go to night school to learn. We’re providing another avenue to a more qualified, better educated workforce.

Is there a tasting component?

PZ: We do taste. Culturally there are not a lot of wine drinkers in the group. So when a winemaker says, “This tastes like a wet pebble,” you see people roll their eyes. At one winery, the winemaker takes us through three wines that he makes from three vineyards and talks about the leafing practices followed in each of them. Then we walk the vineyards so students can see that this canopy is more open, with more sunlight, so the wine is less grassy.
Zellman (in white hat) mentors vineyard supervisor Julio Gonzalez.

How is the program funded and how do you recruit participants?

PZ: LCWC pays for the transportation, food and my time. The program costs $15,000 to $18,000 a year. This year we have 14 students. In the early years, we twisted arms. Growers didn’t want to be without their supers for that much time. One major grower didn’t support the program for the first four years, but then he sent one person and was so impressed that this year he sent four people.

How do you evaluate the program’s effectiveness? Can you point to any examples of how it has made a difference?

PZ: One of the students moved up to become a viticultural technician and his ultimate goal is to go to Cal Poly or UC Davis. We have had four father-and-son duos come through the program. The program motivates people to try other practices. They might say, “We don’t need to spend all that money on labor to do leafing. I saw a tool for that at Gallo Sonoma.” It’s an additional set of eyes for vineyard managers. Now these supervisors feel more comfortable saying, “I know something about this industry, too.”

RK: When we’re waiting 45 minutes in front of the Unified Wine & Grape Symposium (a trade show) for a student who’s gotten lost in the exhibit hall because he’s having too darn much fun, that’s not a bad thing. When students get inside that hall, their eyes are like silver dollars.

When a class visited Cardinale Winery, we had one student proclaim, “I’ve been in this industry for 35 years and I’ve never seen the inside of a winery.” That went right to my heart.

To me, it’s intuitive that if you feel isolated in your job, that’s not a growth environment. We know you need to put plants in sunshine and in an environment where they can thrive. It’s no different with employees.

Could this program be a model for other regions?

RK: One reason it works in Lake County is because of the resources of the LCWC. The LCWC is funded by a marketing order and the Master Vigneron Academy is ultimately a marketing tool. In other regions without a grower commission, it’s going to take leadership, but I do believe it could be a statewide program.