Striving for Balance in a World of Extremes

Dave Rosenthal’s parents, Janet and Pat, arrived in Lake County roughly a half-century ago on an unlikely mission to make wine. The couple bought an abandoned vineyard two hours from home and drove there every weekend, first to repair the property, then to harvest it.

Dave was in high school when his parents took the leap. “They had zero background,” he said. “They bought a general viticulture book and read it chapter by chapter. They basically did everything three or four times, learning as they went.”

Roots of a life in winegrapes were taking hold in the mind and spirit of the couple’s son too. Dave eventually set off for the University of California Davis to study winemaking and viticulture, following a path taken by so many of his modern peers in Lake County and across the region. After living and working in Lake County, Dave eventually went on to work at Buena Vista Winery in Sonoma County. This is where he met Monica, his future bride. A decade later, they came to Lake County and began managing the family vineyards.

Dave and Monica now reside in Middletown. Here and far beyond, they are known for their expertise, integrity, sustainable farming, and award-winning wines. R Vineyards recently received double gold medals for their 2018 Cabernet Franc and 2018 Reba Red Blend at the San Francisco Chronicle Wine Competition. Above all, they are known for, and especially take pride in, “doing it right,” striving for balance in a world of extremes. 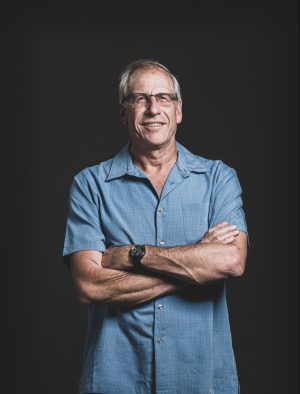 Much of Lake County’s success with Sauvignon Blanc can be attributed to Dave’s efforts while at Buena Vista Winery. Dave introduced the winemaking team to grapes from the region and it led to a program that grew tremendously in a short amount of time.

Sauvignon Blanc from Lake County, conversely, brought fruit characteristics that diverged from the established norms. A wine-tasting panel responded. “That was the wine that the tasting panel liked best,” Dave said.

Production soared to 5,000 cases, more than what was being produced across Alexander Valley at the time. Two gold medals and a best-in-show award followed over a two-month period. Within a few months, the variety sold out. The following year, another five gold medals came and another 12,000 cases went out in eight months. Production nearly doubled the following year and eventually swelled to 80,000 cases with Lake County on the label.

“When we talk about the future of Lake County,” Monica said, “it’s reaching out to find those openings that are beyond Lake County. There are opportunities to really let the world know about what Lake County is doing here with grapes and grape growing.”

Both Dave and Monica are part of the fabric of a tight-knit Lake County winemaking community, unique as much for its sense of unity as for the flavors stemming from its vines. The Rosenthals were integral in the formation of the Lake County Winegrape Commission, and Monica has held a wide range of local leadership roles, including positions with the county Farm Bureau, Planning Commission, Winery Association, Fair Board, and Economic Development Corporation.

“There’s a commonality of purpose here in Lake County,” Dave said, “and so over the years we’ve worked really well together.”

That bodes well for Lake County winemaking. “I think we’ll continue to have better made wines from varieties grown in the best locations in the county. I think our reputation will just continue to grow.”

For the next generations of winemakers, integrating into the community is part of the appeal and an essential ingredient for success. “Talk to people,” Dave said.

Monica elaborated, “Work closely with winemakers,” she explained. “Learn all the little changes that make a difference in the bottle, both quality and flavor, because Lake County has the potential to produce wines packed with flavor.”

It’s a lesson the Rosenthal family has been continually learning and sharing for almost 50 years.