This story, which brings together winegrapes and draft horses, begins with a married couple, the pursuit of a dream, a ranch in Alexander Valley, and four French Percheron horses that needed rescue. It’s the story of Elk Mountain Vineyard. 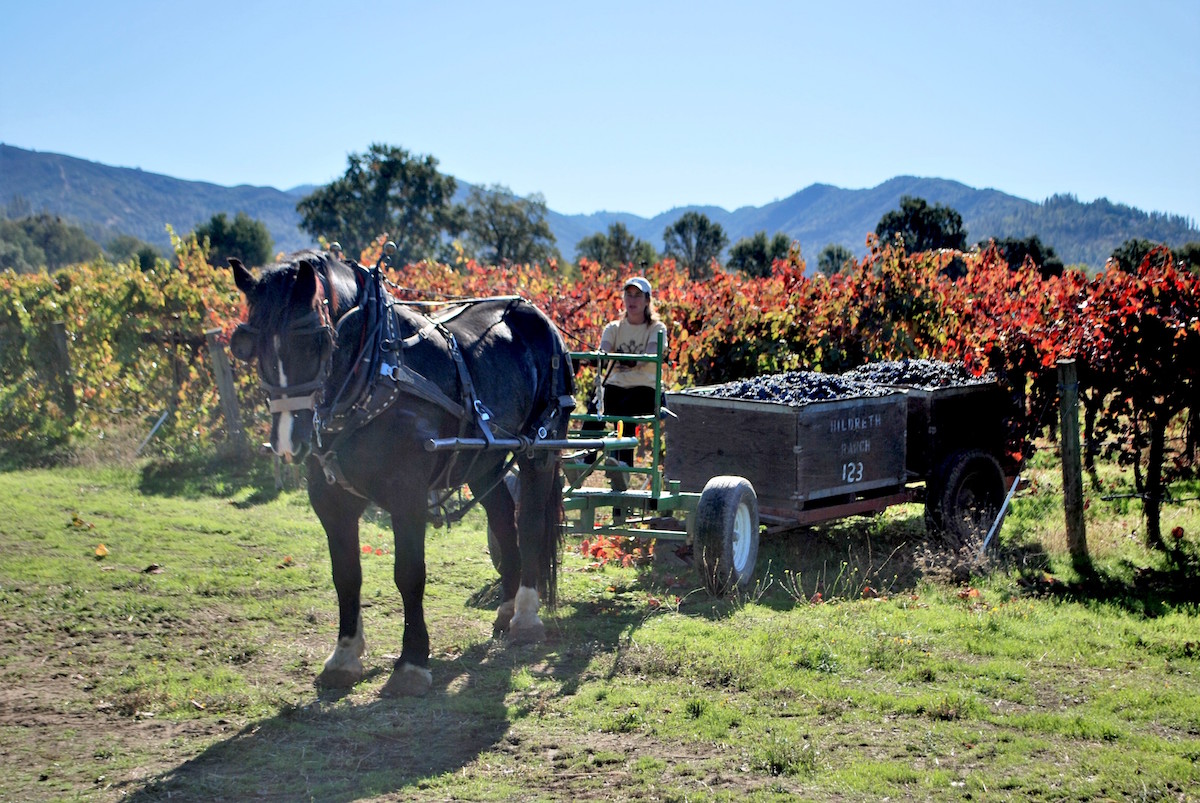 Dana DiRicco, with a family history of wine growers and a “bucket list” desire to own a draft horse, was approached by a friend who knew her dream. The friend relayed a story about French Percheron foals being euthanized in Canada. (Backstory: The urine of pregnant Percheron mares was used in the production of Premarin, a medicine that had been declared unsafe and was no longer in demand. Thus, the hordes of horses bred for this purpose were thus no longer needed.) The friend pleaded with Dana to buy one of these horses. She bought four.

Enter Glenn Benjamin, Dana’s husband and a veterinarian with a penchant for exotic animals and a ranch in Alexander Valley. Glenn agreed to Dana’s wishes to bring the horses to his ranch where he and Dana would nurture them and learn how to care for them, drive them and put them to work. The ranch, however, proved too steep to drive the horses, so in 2007 they purchased another ranch and vineyard near Elk Mountain in Lake County and brought the horses there.

“We purchased the ranch for the horses,” says Dana. “We didn’t even know what varietal of grapes we were purchasing.” As it turned out they had bought a vineyard with thirty acres of Sauvignon Blanc and an acre of other grapes suitable for port.

The foals Dana and Glenn rescued in 2004 came from a ranch known for selective breeding and whose horses had show-quality bloodlines. Each of the four horses purchased by Glenn and Dana was named for a Greek God; Hera, one of the horses, proved to be exceptional. Her story from Premarin Farm to draft horse driving champion in the U. S. and Canada is chronicled in Dana’s novel, And Then Came Hera.

With flat land more conducive to the nature of the Percherons, the vineyard near Elk Mountain proved to be perfect for the horses. Dana and Glenn learned how to drive the horses and because they are known throughout the world as work horses, they soon found that putting them to work was good exercise. The horses worked part time in the vineyards to cultivate the soil, haul grapes out at harvest, and “mow” between the vines. Their by-product is used to fertilize the land, and as a result Dana and Glenn have never had to purchase commercial fertilizer. The vineyard is now a California Certified Organic Farm that is rich in nitrogen and producing upward of 200 tons of grapes each year. Last year Glenn and Dana had inquiries from 13 different wineries seeking their wine grapes. They sell to three wineries with Bonterra Fetzer receiving the lion’s share of the Sauvignon Blanc wine grapes.

The entire valley in which Elk Mountain is located is a world-class region for Sauvignon Blanc. The organic practices used by growers there have improved the quality of the land and led to grapes that are highly competitive with similar varietals from other regions. “The organic program has improved winegrape quality and created a more ‘citrusy’ flavor and a good nose that’s unusual for this grape,” says Glenn. Since 2008, they have sold every grape with excellent contracts. Currently, they are about to enter a 10-year contract for their port grapes at $2,000 per ton with a vineyard designation.

With an elevation below 1,500 feet, deep soil, and a high water table, the farm requires minimal irrigation, and is usually dry farmed. “The soil is sandy and loamy, the nights cool, and the days warm,” says Glenn, explaining that the conditions create the perfect formula for producing a superior product.

A side benefit of organic farming, or “leisurely graping” as Glenn prefers to call it, is the return of abundant wildlife, with elk, bear, mountain lions, osprey, quails, and dragonflies now often seen at Elk Mountain. Dana, who was recently selected to be featured in the Bonterra Fetzer International Women Farmers Day, is excited about this natural outgrowth of good farming, which reminds her of her childhood, when wildlife was abundant and roamed freely.

Application for a new AVA

The geographic features of the area, with its defined boundaries bordered in the east and north by the Mendocino Forest, makes it a potential candidate for an AVA (American Viticulture Area) designation. The area, which consists of Clover Valley, Middle Creek Valley, and Bachelor Valley, is “a unique microclimate with a uniform composition of soil that produces a highly superior product,” according to Glenn.

Winegrape growers in the area have agreed to apply for the designation, which they hope will be called the Elk Mountain Valley AVA. An application to the federal government is expected by mid-summer 2017. Instead of requiring each of the growers to contribute a sum based on a pre-determined percentage, the group decided on a voluntary contribution method, which has yielded enough money to move forward with the application process.

“An AVA designation means name recognition,” Dana explains, adding that for consumers shopping for a bottle of wine, the AVA and the art work on the label are “the two most important considerations.” She feels confident the designation will be awarded, expressing optimism that their vineyard and their neighbors’ vineyards will soon be part of the Elk Mountain Valley AVA. 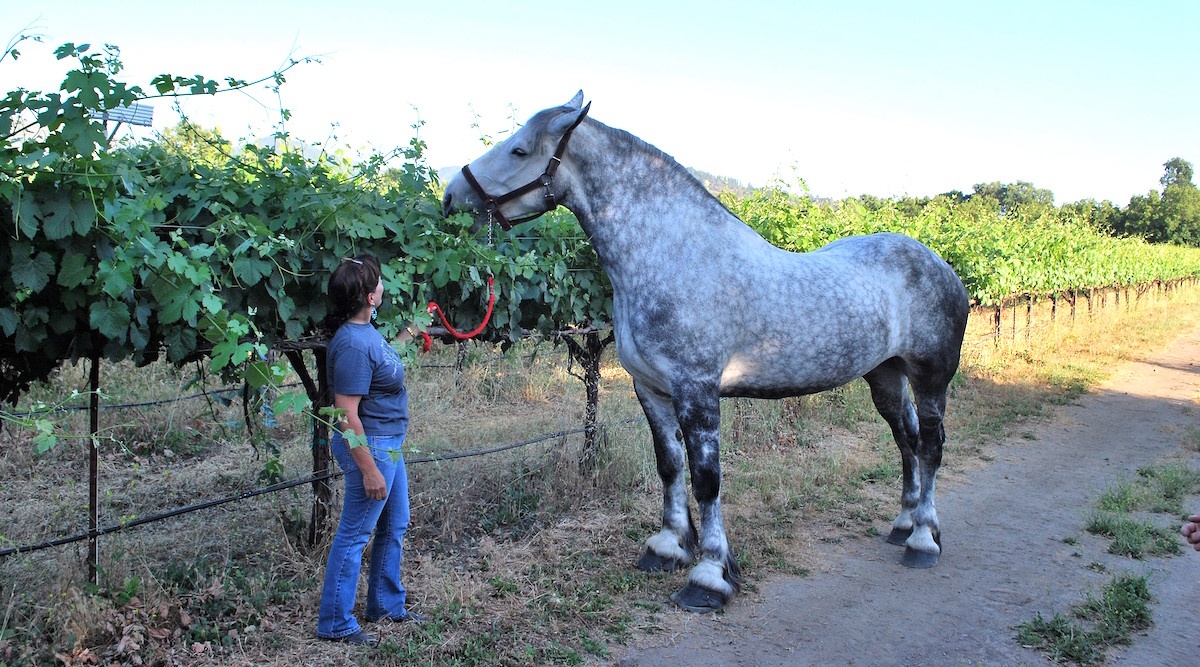